About an hour’s flight away from Manila is Cebu. It is an island in central Philippines with Cebu City as its capital. The island is long and thin with a few smaller islands off-shore. The airport is located on the flat island of Mactan which is separated from the main island by the narrow Mactan Channel. Cebu City is one of the main centres of commerce, trade and industry in the Visayas and Mindanao region of the country. Because of this and other important aspects that Cebu City was given the moniker Queen City of the South. For local and foreign tourist, there are many places of interest in Cebu. One is “Magellan's Cross” which was named after Ferdinand Magellan, a Portuguese explorer who came to Cebu in the early 1500s. Pieces of the original cross are believed to be encased in the present cross. The monument is just across the street from the Sto. Niño Basilica in downtown Cebu City. It used to be the only Catholic Basilica in East Asia. The basilica houses the famous “Santo Niño” the patron saint of the Cebuanos. Another place to see is the Spanish “Fort San Pedro” which is where the Lapu-lapu shrine is (Punta Engaño) it is also where the Battle of Mactan took place.

The “Taoist Temple” is also a good place to drop by. One can see the entire city on top of the hill. Then rent a cab to “The Top” a small park on top of a mountain where one can spend a few hours while having a drink or two. During sunset and at night you can see glowing lights from the buildings and houses below the mountain. If one likes to try the local produce, go to Carbon Market, which carried a variety of fresh vegetables and delicious fruits. 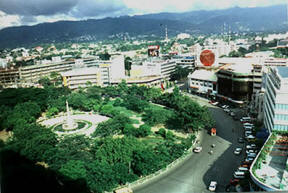 If you happened to be in Cebu City in January, don’t miss the “Sinulog Festival” – held  every third week of January, it is the fiesta of Sto. Niño (Child Christ). The celebrations consist of a fabulous procession of the image of the Child Jesus followed by devotees of Sto. Niño. After which, a fluvial procession takes place. There is also a parade of magnificent floats along the main roads of Cebu City followed by local groups in colorful costumes, dancing and chanting along the route. Sinulog Festival is marked by street dancing by tourist and locals alike under the constant beating of drums. This festival is the Philippine version of Mardi gras. During Sinulog week, all hotels in Cebu City are fully booked. So if you plan to attend the festival, book way ahead of time. The year long attraction to many tourist to Cebu are its beaches. One can find many beaches throughout the island; north and south of Cebu City. And just across the city on Mactan Island (where the airport is located), are several beach side resorts, hotels, bars and restaurants. Mactan Island boast of world class diving spots to please the diving enthusiast. To get to Cebu City, one can take the many ferry boats that ply the Manila-Cebu route (about 23 hours) at the Port of Manila -if you are on a leisurely vacation. But to get there fast, catch any of the airlines that fly almost hourly to Cebu at the Manila Domestic Airport (all airlines except PAL) or the Centennial Terminal (for Philippine Airlines only). By Air
Mactan-Cebu International Airport (IATA: CEB) (ICAO: RPVM), [1]. This international and domestic airport is a modern alternative to the congested Ninoy Aquino International Airport in Manila. There are numerous direct daily flights to and from Korea, Singapore, Hong Kong and scheduled flights to Japan, Qatar, Malaysia, Taiwan, and China. Aside from this, the airport serves several seasonal charter flights to Russia, China, the United States, and other nations. Mactan Cebu International is also the main domestic hub outside Manila with a variety of flights around the Philippine archipelago such as Manila, Kalibo, Puerto Princesa, Boracay, Clark (just near Angeles City), Siargao (Surigao), Zamboanga, Davao, Bacolod, Iloilo,Cagayan de Oro, Cotabato, Camiguin, General Santos, and Tacloban, among others. Passport control and baggage handling is fairly fast and efficient. Visitors from North America, Europe, Middle East, and the rest of the world may fly first to Singapore or Hong Kong or Seoul or Kuala Lumpur or Doha to catch a flight to Cebu. If you don't mind braving the horrendous traffic and the cacophonic noise of Manila, you will get a faster connection to Cebu, for there are more than 20 flights daily between the two cities or almost two flights every hour. There are also flights to Cebu from Clark International airport, from which there are further flights on discount airlines to Macau, Kuala Lumpur, Bangkok, Singapore and other points.
By Land

Do as the locals do and catch a colorful jeepney. Simply ask around for which route to take. They are available 24 hours and cover most of the nooks and crannies of the city. Airport to Lapu Lapu City (LLC) costs about 7 pesos, while across the bridge to Mandaue or Cebu City costs more than ₱10.

Buses are also available but these tend to ply exclusively along the north-south route.

If you do not wish to give up western comforts take a taxi. Always insist on a metered fare. Most trips around the city should cost not much more than ₱100(usually less).

Drivers however may bargain if they notice that you are a tourist, hence the cost of the trip may double in price. However, you have the option not to agree and may report such to local authorities. If you know the name of the building, establishment, area or street you wish you reach, this is still the fastest way to get to your destination. Most drivers know where almost everything is. If they don't, then simply flag down another one. If the driver is pleasant then it is nice to pay 10-20 pesos extra for nice service and a bit more if he loads or unloads your bags. Most drivers do not have, or will tell you they do not have change, so be ready with 50's and 20's if you are going on short trips.

It is best to avoid the "Private" taxis. They take advantage of tourists and they charge 5-10 times the price that should be paid. You will find these taxis at the some of the classy high class hotels, they are called Hotel taxis and are usually owned by the hotel to make extra money, they will charge you ₱500 for something that should cost ₱60. Some hotels make it very hard for other taxis to pick you up at their hotel and you may need to walk outside to save money. Another place that uses private taxis is the airport. The arrivals terminal only allows taxis that have a special airport permit that costs thousands of pesos per month, but these taxis get to charge you a much higher price. If you want to avoid them simply ask a porter for help and ask for a metered taxi, you go up a ramp and there are a large number of metered taxis waiting for you. You can also wend your way upstairs to departures where there are lots of metered taxis dropping off. Fare down town to Ayala or SM Malls should be around 150 pesos on the meter. You may be told "500" by the driver. Just grab the door handle and say "What, you don't have a meter?", Don't travel unless the meter is used, this is illegal and you can report it to local officials.

Large passenger ferries with a capacity of 2,000 to 4,000 passengers ply the more distant routes such as Manila, Davao, Butuan City, Zamboanga andCagayan de Oro. Medium-sized vessels such as the roll-on/roll-off (roro) types ply nearer destinations while fast ferries transport passengers to and from neighboring islands in two hours or less depending on the destination.